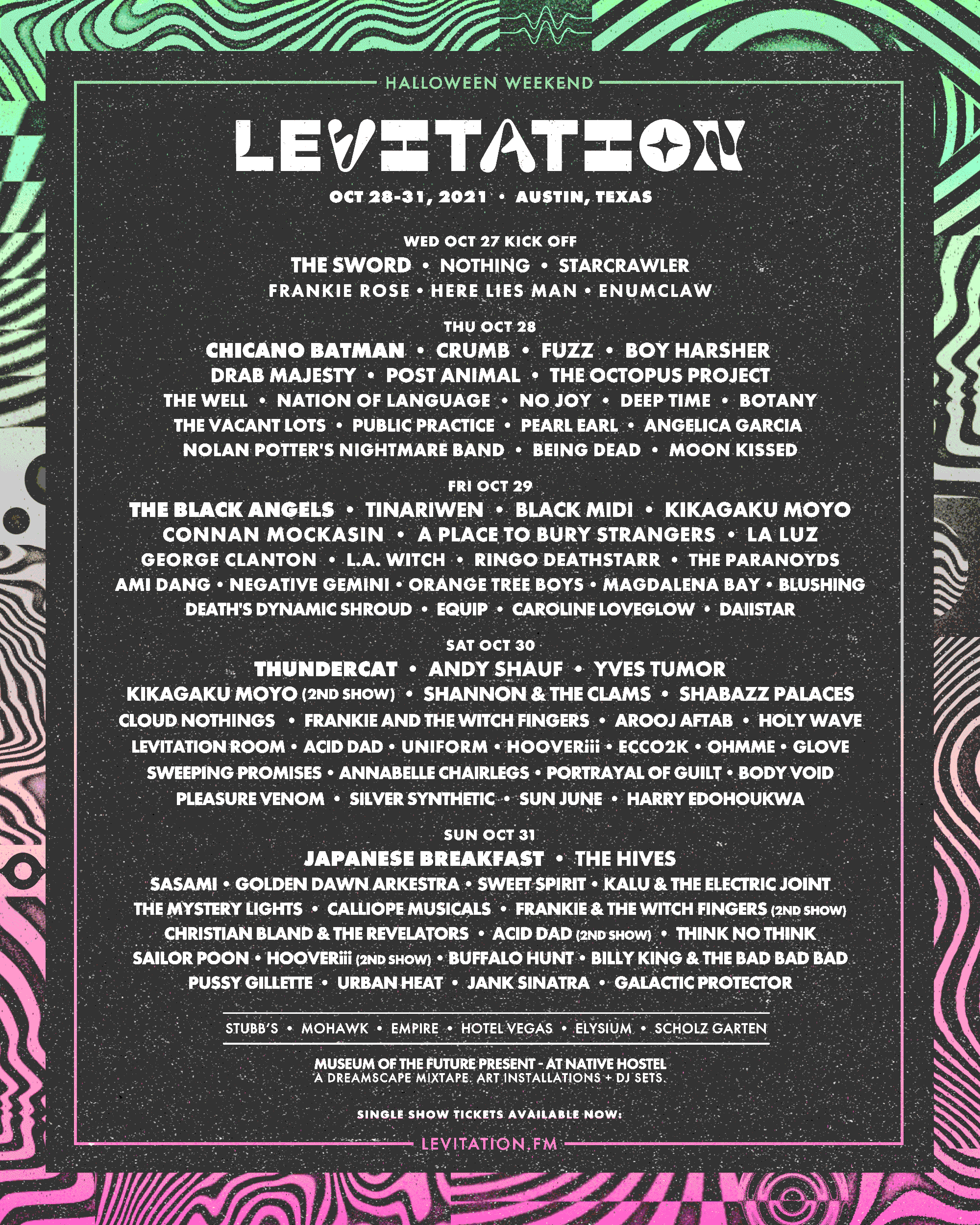 Just a month and a half left until LEVITATION 2021! We're pleased to announce some new additions to the lineup + we have some show updates and venue changes to share. Event start and end times shown. Set times will be posted later in October!

Peep the updated schedule + lineup, and remember to grab your tix if you haven't yet because tickets are flyin and a lot of shows have already sold out. All available here:

• In case you missed it, The Sword now tops off the kick off show happening 10/27! Red Fang is no longer playing that show :/

• Deep Time, Botany, Moon Kissed have been added to the Octopus Project show which is now taking place at Scholz Garten!

• Kikagaku Moyo added to the show at Stubb's with The Black Angels, Tinariwen and Ami Dang!

• A 2nd Connan Mockasin show added and both are now at Scholz Garten!

• The La Luz show has moved to the Hotel Vegas patio!

• Black Midi has announced Orange Tree Boys as the special guests on their show!

• The Yves Tumor show is now at Mohawk - and that means there are some tix avail for this previously sold out show + Ecco2k and Harry Edohoukwa have been added to the show!

• Pleasure Venom has been added to the Cloud Nothings show at Hotel Vegas!

• Ohmme has been added to the Shannon & The Clams show at Empire!

• Daiistar has been added to A Place To Bury Strangers at Elysium!

• Sweet Spirit has been added to the Japanese Breakfast show at Stubb's!

• New Halloween show added for LEVITATION 2021! The Reverberation Appreciation Society presents Frankie & The Witch Fingers, Christian Bland & The Revelators, Acid Dad and Hooveriii each performing a set with their regular rippers + tributes to The 13th Floor Elevators, Spacemen 3, The Stooges, The Jesus and Mary Chain, and Hawkwind!

• Scholz Garten has been added as a LEVITATION 2021 venue!

• Unfortunately Cheer Up Charlies and Central Presbyterian Church are no longer part of our 2021 programming :(